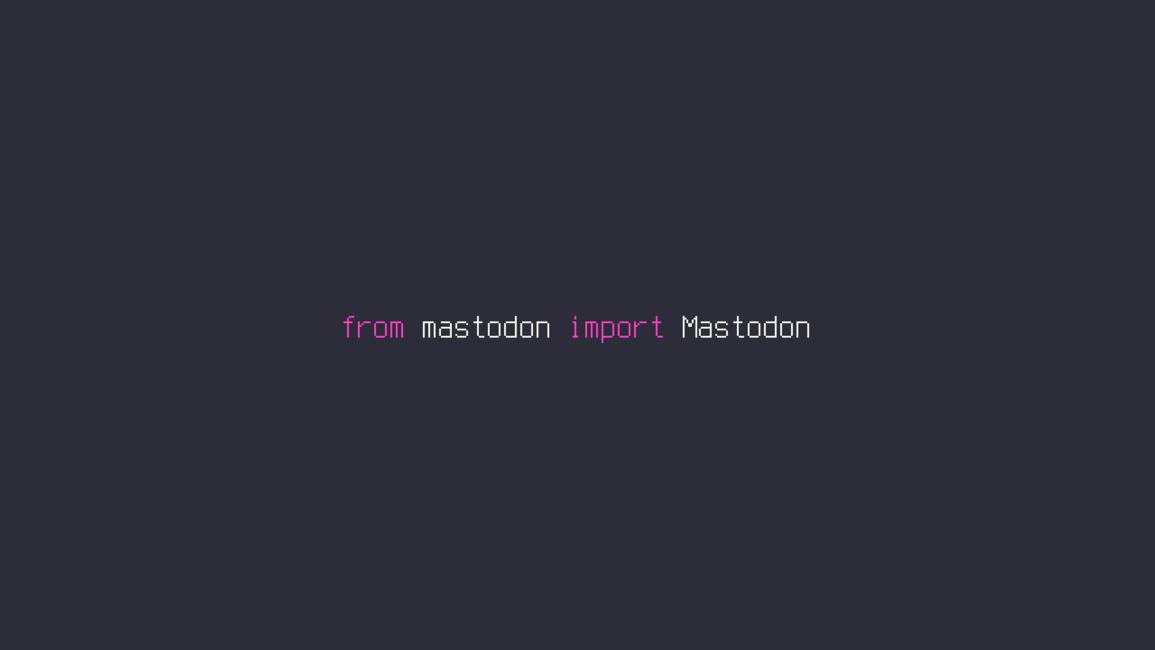 @lynnesbian's alt account where she posts about the software she's creating and other computer-related stuff!

just a reminder that i have a patreon now: https://www.patreon.com/lynnesbian

the main tiers to be interested in are:
- ebooks bot ($2.50) - your own ebooks bot, hosted on my server
- custom bot ($6) - i'll make you your own simple bot. it can make images black and white, find rhymes, play tic-tac-toe, whatever you'd like

my main projects are:

This is a solvable issue, but there isn't a solution that is as easy to implement or as well functioning as the Mastodon/Misskey method. The best I can think of is "remembering" that there are still 10 posts to download, and next time mstdn-ebooks runs, downloading those 10. This has its own drawbacks, however, and is a pretty major change to implement for the sake of a single platform not implementing this particular part of the ActivityPub spec. I'd like to note that the 'prev' key is optional in the spec - Pleroma isn't failing to comply with the AP spec, just not implementing a particular optional feature that saves a lot of headaches.

This issue puts it succinctly: https://git.pleroma.social/pleroma/pleroma/issues/751

"No 'prev' property is defined, which could logically point to the 'future' page - this is a the main problem [...] the only way for this check is to request initial endpoint page [...] that results in unnecessary duplicated requests and data transfers, and complicated syncing logic."

There are a few interesting quirks in how Pleroma formats its outbox, mainly that you can't ask for newer posts - only older ones.

When connected to a Mastodon or Misskey instance, mstdn-ebooks (and FediBooks) works by starting from the oldest user posts it's seen up to that point, and then getting the newer ones until it's caught up to your latest post.

However, this won't work when using a Pleroma instance, because you can't ask for newer posts. Instead, mstdn-ebooks gets your newest post, and works its way backwards until it encounters a post it's seen before.

This is usually okay, but with one exception: Rate limiting. If you've made 50 posts since mstdn-ebooks last checked, but your server is set up to only allow downloading 40 posts in a row, it'll get the 40 newest posts, and the 10 other new posts you made won't be downloaded - ever.

mstdn-ebooks and FediBooks have both been updated to handle a breaking change in Pleroma's outbox format.

It seems that nobody noticed that any Pleroma instances running 1.0.7 or newer didn't work with mstdn-ebooks or FediBooks, but today someone *did* notice, and I've fixed the issue.

After what feels like forever, OCRbot has received a minor update. The code has been cleaned up, and I've written a guide explaining the various potential error messages: https://github.com/Lynnesbian/OCRbot/blob/master/README.md#Errors

So if you've ever received an error message from OCRbot without knowing why, this should help.

Cleaning up the code makes it easier to introduce changes later, and makes me feel more comfortable about OCRbot's stability.

If you encounter any issues, let me know, either by tagging this profile, my main account, or sending me an email at lynne@bune.city.

for those who've been following along with this thread, i'm sure you've seen that it's been quite a ride!

once the mstdn-ebooks import functionality is done, i'll be shutting down my paid hosting service after a week. this means i'm cutting off the income source i mainly use to pay for the server.

there are currently no donor benefits, although patreon pledgers (to any tier) will get early access to my lynne teaches tech posts.

As you will have seen if you've been following my maini account, FediBooks is now live.

You can now sign up for a free account and create your own ebooks bot(s) at https://fedibooks.com

This is not the same as the old FediBooks project, it just uses the same name.

If you're getting me to host your ebooks bot(s), there's nothing you need to do.

If you're hosting your own (or someone else is hosting yours for you), you only need to do anything if any of the users your bot learns from use Pleroma. In that case, you need to delete `toots.db` and restart the reply service.

New in mstdn-ebooks: You can now specify a custom location for the config.json file.

@goat has just added support for asking ebooks bots to un/pin their posts. simply reply with
@botname pin
or
@botname unpin
and it'll do it for you!

this feature isn't quite perfect yet, and i'm in the process of reauthenticating all the bots i manage to work with this new update!

you might have noticed OCRbot handles "dark theme" images better. this is because of a recent feature added by @roxxers@roxxers.xyz

i've pushed an experimental fix for the OCRbot federation bug (this one: https://github.com/Lynnesbian/OCRbot/issues/8). hopefully this fixes OCRbot's longest standing bug!

i'm currently doing some maintenance on https://searx.lynnesbian.space. there might be some server errors, slow results, etc.

i made a post about why i should never have made OCRbot, and where and how i went wrong with it.

(the text in this screenshot is taken from https://lynnesbian.space/csl)

The Cooperative Software License (CSL) is a copy-far-
left (as opposed to copyleft) license that aims to rectify
some of the issues that arise when using a copyleft
license such as the GPL, namely, that your work can still
be used in some extent by commercial entities and
other for-profit ventures. It is based on the Peer
Production License, and is adapted to be more
applicable to software.

Licenses like the CSL and any Creative Commons Non-
Commercial License are not libre (free as in freedom)
software licenses, as they restrict the freedoms of
certain user groups and use cases. This is why the CSL
is classed as a copy-far-left (as opposed to copyleft)
license. It is therefore incompatible with (and thus
cannot link to) software released under licenses such as
the GPLv3 or the MPLy2. It's important to keep this in
mind when using the CSL for your project. The CSL is,
however, compatible with less restrictive open source
licenses, such as the MIT License or Creative Commons
0. The Free Software Foundation lists reasons why the
Peer Production License (the basis of the CSL) is not a
free as in libre license.

OCRbot now reports the character count of its transcriptions in the content warning. see its reply to this post for an example.

a list of all config.json options for mstdn-ebooks can be found here: https://github.com/Lynnesbian/mstdn-ebooks/blob/master/README.md#configuration

@lynnesbian's alt account where she posts about the software she's creating and other computer-related stuff!